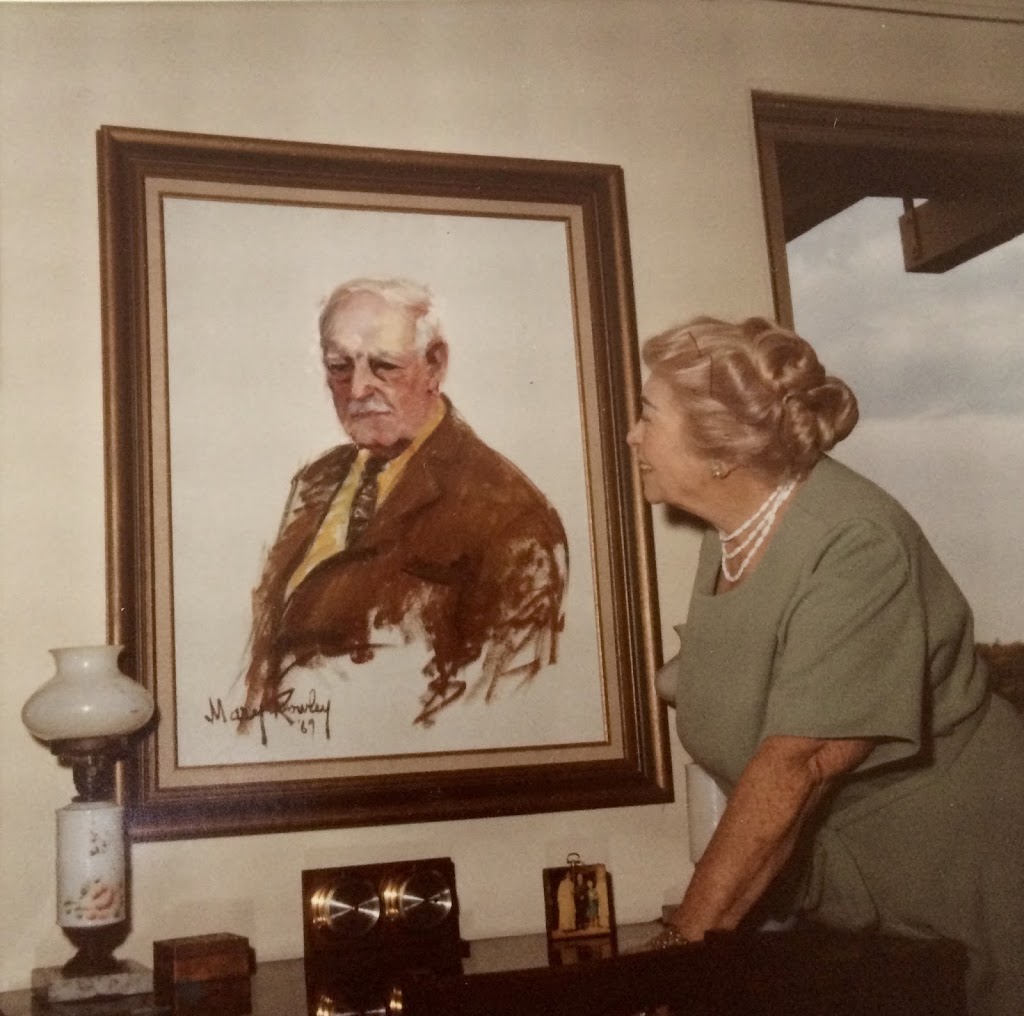 Not until the early 1980s did time finally begin to catch up with the couple who had deftly evaded its reach their whole lives.

My Great-Uncle Phillip McCormick slowed down considerably after suffering a pair of strokes in 1980, as he was turning 88. Aunt Detty, three years his senior, walked a bit slower by then, but she was still sharp of mind and memory and did her best to help Phil regain his speech and his own memory. For some time, he was laid up in a hospital bed in the McCormick’s study, where a physical therapist visited him regularly.

Aunt Detty was devoted to Uncle Phil in those final months. She would sit next to him, often bringing visitors into the room so they, too, could stimulate him with fresh faces and voices. Remembering tales of days gone by, she often stopped in mid-sentence to ask him a name or a detail, as if she could not remember it herself.

When he could not recall a word or a name or a date, she would gently give him a hint or a wink, never prodding but encouraging him to surface the memory from the recesses of his mind. She was not about to give up on him. As with any long-time married couple, their life had not been without its ups and downs. Now, in the midst of their greatest challenge, they would weather the storm together.

A sailor’s daughter and herself a life-long adventurer, she knew what it was like to navigate rough waters. Some years before, she had, in fact, done an oil painting of two men in a small fishing boat, holding steady through rocky seas. Now she steered the course for both Phil and herself with unwavering determination and resolve.

After some difficult weeks, Uncle Phil began learning to talk again, but it was too slow for his liking. Not longer after that, he suffered a couple of setbacks. Noticing his frustration, Aunt Detty would squeeze his hand or pat him reassuringly on the shoulder, leaning over to kiss him tenderly. The adoring way he gazed back at her through his clear blue eyes when the words would not come spoke volumes more than anything he could have said.

It was hard for the family to say our final goodbyes.  I remember my Aunt Jane, Phil and Benita’s daughter, calling on March 24, 1980, to give me the sad news that he had died.

Everyone worried about Aunt Detty.  When you have spent 60 years of your life with someone, losing them must be like losing a part of your body. She tried to be philosophical about it and talked about their being together again someday when she got to Heaven.  She was 92 by then and still living on her own.  She did her best to keep active, receiving visitors and reading and responding to condolences from friends and family far and wide.  But the nights were the hardest, after everyone had gone home.

In a letter to me in the summer of 1981, a few months after Uncle Phil’s death, she wrote,

I am very slow in answering all the wonderful folks who told us they loved us with their many kindnesses and prayers. But they were a prodigious group and only now am I working my way through the pile of mail before me.

More mail comes daily from those who have just heard about Phil.  Thank you for your great comfort and love during my ordeal.

I feel more like myself now, though the arthritis is still very tough – no new medicine seems to reach it.

But…I shall carry on, eh?

Carry on she did, busying herself with her projects, old and new.  One of them was selling bee pollen by mail order. She was convinced of its health benefits and saw herself as a pioneer in the nutritional supplement field, accurately predicting that its popularity would grow. Even after moving in with Jane and her family in San Carlos, she sent samples of bee pollen to grocery and drug stores, sports groups, even to major league sports team training camps:  the San Francisco Giants in Scottsdale, Arizona, and the San Francisco Forty-Niners in Redwood City.
Unfortunately, bee pollen could do only so much to stave off the ravages of old age, and Aunt Detty grew increasingly frail. She could hardly walk anymore, and Aunt Jane, Uncle Ole, and their daughter Suzanne took turns pushing her wheelchair and helping with her daily routine.
She was a guest of honor at our wedding in the summer of 1984.  As delicate as she looked by then, her triumphant face showed her pride at witnessing the day as we walked down the aisle past her.  You would have thought she had orchestrated the whole thing.  She loved my husband – “I’m just mad about him, Linda.  What a dreamboat!” she had written to me after meeting him a year earlier.
Five months after our wedding, Aunt Detty fell at Jane’s home.  The fall precipitated her decline rather quickly, though today I can’t remember the particulars; maybe because it was too painful to think about at the time.  When we heard the news, my husband and I had just returned home from a trip to Mexico City, and I was only too grateful to have the chance to go to the hospital to see her one last time. She drifted in and out of consciousness and died peacefully a few days after Thanksgiving, on November 26, 1984.
She was 95 years young.
Of course, being Aunt Detty, it was only fitting that she would have the final word. And so it was that her funeral, after all the eulogies and laughter and tears, we listened to the reading of a poem she had written around the time she and her beloved Phil had celebrated their 50th wedding anniversary.
I like to think of it not as her farewell, but rather as a love letter to Phil and an au revoir to all of us.
Voyage for Two
When I have finished all my earthly tasks
And said my last goodbye to those I love,
And settled my cold bones in that warm earth
My venturous spirit then will want to rove
And bidding me to follow she will race
To that dark harbor where the strange ships wait
And we shall steal abroad like ghostly mice
And hide in shrouds until she clears the gate
And I shall know the ecstasy I’ve sought
In waves of beauty promised by fair isles
With color far surpassing all my dreams
Enough to meet the distance of their miles.
All exotic places shall be mine;
Those I have known, and those I fan would woo
But Darling, that is when I’ll know the truth.
I just won’t want to seek them without you.
So we shall wait unseen, my sprite and I,
In some sweet spot, bright as a wild bird’s feather
Until you hear the call and find us there
And you and I shall sail new worlds together.
– Benita McCormick, 1971
**
Copyright ©  2016  Linda Huesca Tully