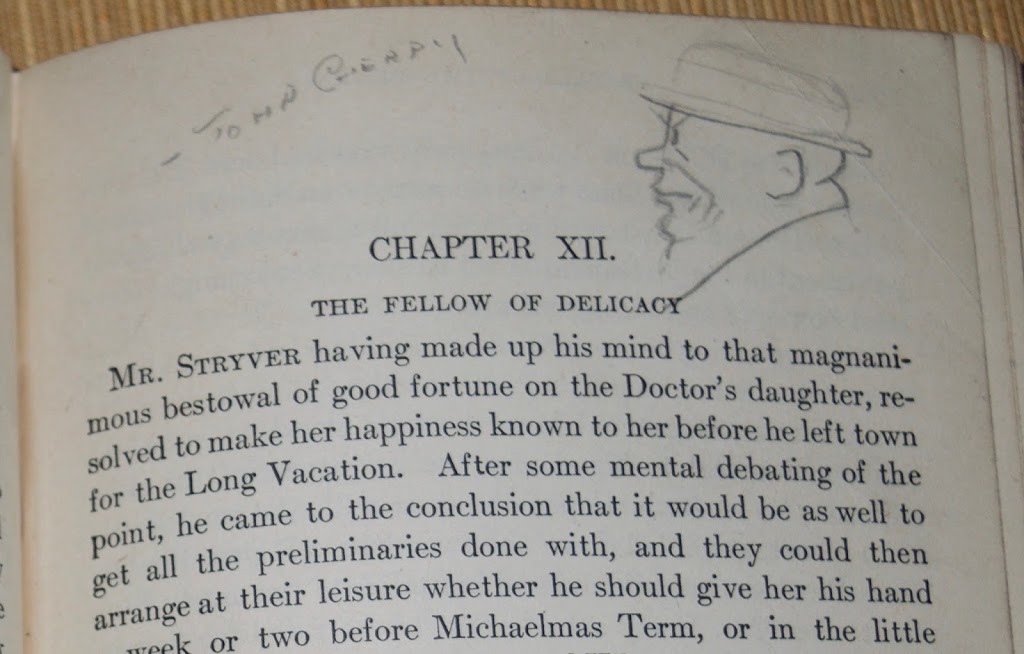 …A wonderful fact to reflect upon, that every human creature is constituted to be that profound secret and mystery to every other.

– Charles Dickens in A Tale of Two Cities

The small red, white, and blue media mail bundle sat on my desk, looking slightly worn from its two thousand mile trip across the country. Though I had excitedly awaited its arrival like a kid waiting for presents on Christmas morning, I paused to savor the moment and reflected on the kindness of the stranger who had gone to the trouble of sending it.

In early May of this year, the sender (who has requested anonymity) contacted me after reading a blog post I had written in 2013 about my cousin, Ohio artist John Terrence Cherry.  In a brief e-mail, she made a generous offer:

Hello, Ms. Tully – While going through my grandparents’ book collection recently, I came across a Charles Dickens book that had at one point belonged to John Cherry.  I believe it was a high school book that had been used by my grandfather (b. 1918, Ashtabula), in Ohio.  It has numerous cartoon doodles and signatures by John Cherry, so I did some internet searching and found your site.  Could I mail you the book?  The book itself has no value, but the drawings are interesting, so I thought you might want it.

I opened the package slowly and pulled out a faded blue hardcover textbook. Inscribed with the initials “CHS” – or Conneaut High School, near John’s boyhood home in Conneaut, Ohio. it was Charles Dickens’ A Tale of Two Cities. It had been one of my favorites from my high school English Literature class.

But unlike the pristine high school textbooks I had used – and not dared mark up, this volume had been well-inscribed by various owners through the years, with one young man’s signature and sketches on more than a few pages:  John Cherry.

Flipping through the book, it seems John was not exactly enamored of Dickens during this time of his life. The occasional margin notes here and there likely belonged to other students, as the handwriting does not resemble that of the hand that penciled John’s name throughout the book.  Instead, the young student seems to have used his English class time as a opportunity to draw caricatures and develop a distinctive signature.

Nearly one hundred years have passed since John made these sketches, and some are more distinguishable than others.  The caricature-like men throughout the book are jaunty characters, suggesting their creator probably was a keen observer, witty, and good-humored. His various signatures also point to the confidence and ambition of someone expecting to succeed in life.

Based on stories I have heard from my mother, great-aunt, and a cousin, all of whom knew him well, John fit this description.  He inherited his naturally charismatic personality from his doting and boisterous Irish Gaffney-McGinnis clan, a bold and fun-loving lot whose frequent gatherings, stories, and pranks were legendary for generations. He stayed close to his family, even living with his maternal aunts in Cleveland in his late 30s and early 40s to look out for them in their old age.

The third of four children of James and Frances (Gaffney) Cherry, John had watched his little brother, Tommy, battle tuberculosis since infancy, eventually succumbing to the disease in 1922 at age nine. John would have been about 16 at the time.

Being a teenager is challenging enough under typical circumstances, but to deal with the emotions that surge from the sadness of and chaos of that tragic period must have been overwhelming.  Maybe art gave John an escape during that rough time. While the class compared characterizations of Lucy Manette, Charles Darnay, and Sydney Carton, it is easy to imagine John sprinkling the pages of his Lit book with lighthearted sketches and his evolving autograph as he dreamed of becoming a famous artist.

My kind benefactor enclosed two other things she found on the internet while researching John Cherry. The first was a sketch he drew with another artist that is reminiscent of his early teenage sketches. The second was a newspaper article from the Cleveland Scene, dated March 14, 2002, about a portrait exhibition in Cleveland.  The article featured a 1929 portrait of John by one of his contemporaries, Cleveland artist Elmer Novotny.  You can see the portrait here.  The writer described John as “a young man looking distinguished and handsome, on the brink of being old enough to have an interesting face; the light falls on him as if to promise a bright future.”

Sure enough, John became a commercial artist and art professor, and, according to my mother and aunt, a charmer with the ladies, though he never married. He adored the mother and aunts who had spoiled him as a child and stayed close to home, looking after them in Conneaut and Cleveland and Conneaut long after his older brother and sister moved away to start families of their own.   Though he did not achieve great fame, he was locally known and respected in Conneaut and Cleveland, Ohio, for his commercial work and impressionistic landscapes and portraits.

As far as I know, two of those paintings survive, both representations from Conneaut.  I have one – “The Walk Home,” a watercolor of Nickel Plate railroad workers trudging home from work on a winter’s evening.  My cousin, Suzanne, has the other, a 1929 watercolor of the view from the family home in Conneaut, as seen below.  His 23-year-old signature in this picture is considerably different from the earlier ones.

Aside from the scant records that mention him such as 1930 and 1940 census reports and his death record from 1956, John Terrence Cherry remains something of a “creature of mystery” to me.  But thanks to the youthful doodles in his schoolbook, another student’s keeping the book in his collection all these years, and the kindness of a stranger who took the time to return the book to John’s family nearly a century later, I am thankful that we know a little more about him today than we did before.