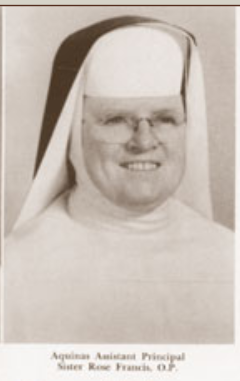 Linda Huesca TullyJanuary 29, 2020December 16, 20204 Comments on The Catholic Educators in our LivesSchiavon Uncategorized

When I was very young, I was certain that one of the highlights of my mother’s high school career was that she got to paint the big toe of her high school’s patron, Saint Thomas Aquinas, on a life-size mural inside the school entrance sometime in the mid-1940s.  She was proud of her small contribution to the memory of a beloved saint that she and her classmates hoped would inspire the quest for learning by future generations of Catholic girls on Chicago’s South Side.

They could not have had a better saint for that cause. Aquinas, one of the greatest theologians and philosophers of the Catholic Church, believed in the moral dimension of education and the obligation of teachers, as role models for their students, to help others seek truth by way of experience and understanding.

Aquinas Dominican High School, a beautiful brick structure on the South Side of Chicago, closed nearly 40 years later due to declining enrollment and rising costs.  Still, the legend of that toe and the saint to whom it belonged followed me throughout most of my life in one way or another.

My mother loved her school and its namesake so much that when I started first grade at Saint Philip Neri School,  just next door to her alma mater, she gave me a small wooden statue of him, holding the Summa Theologica.  It has endured several big moves, a corner breaking off its pedestal at some point, and today it has pride of place on a bookcase in my office.

Most of us have a favorite teacher or two, people we remember throughout our lives who made a difference to us. Today, on the occasion of Catholic Schools Week, I want to share my heartfelt thanks to and fond remembrances of these educators, some of whom have gone to their heavenly reward and others who are still with us, all of whom meant a lot to my family and me. Thanks to her experiences, my mother, Joan (Schiavon) Huesca, instilled in my sisters and me a love of education and an appreciation for the value of Catholic education in particular.  One of her teachers, Sister Rose Francis, an Adrian Dominican nun, had a huge influence on her.  To hear my mother say it, Sister Rose Francis was one tough cookie who was as much feared as she was loved by her students for her passion for teaching.

Sister Rose Francis, O.P.
My mother’s stories about her were the stuff of legends.  She knew that one day her students would be glad they memorized those long Shakespearean sonnets.  She emphasized humility by having the prouder students scrub the floors with a toothbrush (something my mother used on me a time or two in my teen years).  She promoted good posture (and a few laughs some years later) with her famous command, “Uncross those limbs,” when she saw girls sitting at their desk with their knees crossed.

Oh yes, and she fostered modesty with that infamous cheesecloth her students (read my mother) had to stitch to the hems of their uniform skirt if their knees were deemed knees visible.  Despite Sister Rose Francis’ toughness, her tender side slipped out once or twice, much to her chagrin but to the delight (and relief) of those who witnessed it.

Sister Mary Inez Hernandez, P.B.V.M.
A sister of the Presentation of the Blessed Virgin Mary, Sister Inez taught me Spanish for three years, encouraging me to expand my language studies to French, Italian, and German.

She nurtured our minds and brought Mexican culture into the classroom with your cooking classes, patiently nudging us along when we forgot how to conjugate a verb or add an ingredient to our chiles rellenos. With her green thumb and a dose of determination, she could bring the most forlorn plant back to life or give hope to prisoners at Elmwood Jail, where she led Bible studies and taught reading and writing.

After she retired, we worked together for the Diocese of San Jose in the Hispanic Ministry Office, often teaming up to translate documents.  I had just become engaged, and in our spare time, we talked about faith and marriage and family.  I will always treasure her laughter and her wisdom.

Gloria Murphy Beyerle
At the time she taught me, she was “Miss Murphy,” the French and Italian teacher at Presentation High School in San Jose.  Young, stylish, and a hopeless romantic, she had studied at the Sorbonne in Paris and delighted in telling us about her adventures as a young student in the Latin Quarter.

Miss Murphy was passionate about life and love, and her eyes would sparkle whenever she recalled her travels.  From the comfort of our classroom, we willingly accompanied her in our imaginations as she took us strolling along the Seine or led a steep climb to the top of Notre Dame Cathedral, where we pictured ourselves rubbing elbows with the resident gargoyles as we gazed out over the city.

Naive, fast-food loving teenagers that we were, we howled at her declaration that the Wimpy’s in Paris had hamburgers that tasted like cardboard and how could anybody ever eat them! (I later tried them.  She was right.)

Miss Murphy played records by Charles Aznavour and Edith Piaf and taught us to sing in French; I still can hear her singing, “Dites-moi, pourquoi la vie est belle.”  She found ways to integrate religion into her classes on French culture; to this day, when I am alone and praying the Hail Mary, I sing it in French.

Her descriptions of Paris were so clear and vivid that the first time I traveled there, everything was right where she had said it would be, and I felt as though I had been there a thousand times before.  Thanks to her, Paris became a treasured friend I have returned to time and again, sometimes in person, oftentimes in my dreams.

Ofelia Ortega Vázquez
My beloved teacher from the 4th and 6th grades overheard the principal of our new school in Mexico City tell my parents that while she could accept my two little sisters into the first and second grades, there was no room for me.  Ofelia Ortega Vázquez, who was bilingual in Spanish and English, interrupted the principal by saying she would make room in her classroom for me.

Ezequiel A. Chavez Primary School was not a Catholic school, but my new teacher was as disciplined as the toughest of Catholic educators.  Knowing we were newly arrived from the United States, with my parents’ permission she took me under her wing and tutored me in her home after school every day in Spanish and other subjects and giving me confidence to believe in myself.  She treated me as one of her own children, letting me play with them and often inviting me to stay for dinner.

Our family’s friendship with her grew, and after we returned to the United States, I asked her to be my godmother for my Confirmation. She was unable to come to the United States for the occasion, but her sweet low voice on the phone, reminding me to always practice my faith in God and make her proud, was as warm as the hugs we shared every day after school in those sweet and innocent days.

While our teachers may not have been leaves on our family trees, they will always occupy a special place in our hearts.  Selfless and dedicated, they have been a constant presence, their names on our lips at the dinner table and on our report cards as the instigators of and witnesses to our curiosity, growth, and progress.

Thomas Aquinas, that patron saint of educators, said it is “better to illuminate than to merely shine.”  Like the sun that nourishes fledgling seeds and warms the ground in which they grow, our teachers warmed us with their love, illuminated us with their passion, nourished us with their dedication, and helped us flourish strong and sure, ready to share our provenance of faith and knowledge with those who come after us.

4 Thoughts to “The Catholic Educators in our Lives”