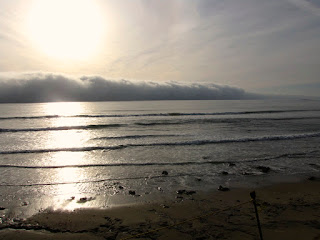 November 22, 1965
Dear Joan,
Received your letter and glad to hear from you and that you are all well.  I am feeling pretty good myself at present.  A week ago Gene Vallee* and I took Joe Hanlon** to South Bend to see a football game and that evening we all had dinner at the Swedish Club.  Thanksgiving day I am having the Vallees for dinner at the Club.
I see you are having problems with the domestic help.  I guess it is very hard to get someone that is serious about work.  I had that problem for sometime and know what it is to find someone reliable.  I hope that you will be able to find someone that will be satisfactory.
Hope that the girls got over their exams O.K. . . .I am enclosing a check for 50.00 to use as you see fit for the holidays for yourself and the children.
I’m sorry that I don’t have much more in the line of news and will close with all my love to you and kisses and hugs for the children.
BA BA.
“Ba Ba” was my maternal grandfather, Ralph Schiavon.  My mother, Joan (Schiavon) Huesca, loved receiving his letters after we left Chicago to live in Mexico City.  She would carefully slit open the envelopes so as not to damage their contents and take them into the kitchen, where we would surround her while she read them aloud.
The “problem with domestic help” to which my grandfather referred had to do with the two maids my parents employed during our stay in Mexico.  At the time, although most women stayed home to run their household and care for their children, most middle and upper-class families hired maids to help with the laundry, cleaning, and cooking.
Our first maid was a young 18-year-old named Maria.  She was the sole breadwinner for her single mother and her eight brothers and sisters, and she lived in a rough-and-tumble shack a few miles from our neighborhood of Colonia Los Pastores. Unlike most maids, she was tall, fair-skinned and had what used to be called “dishwater blonde” long hair. I don’t know how many women my mother interviewed before she met Maria, but the two instantly connected. My mother liked her sweetness and eagerness to learn and found her to be friendly and well-mannered.
By the end of Maria’s first week, my mother had given Maria some of her own dresses, helped her dye her hair a golden blonde and put it in rollers, and was teaching her English.  From the back, the two of them looked so much alike, they could have been sisters, except one of them was always singing in Spanish.
By Mexican standards, it was a lopsided relationship.  Maids were expected to keep to themselves and serve their employers quietly, and employers were not expected to get involved in the lives of their domestic help.  While my mother must have been aware of this, she treated everyone equally and respectfully, no matter what their status in life was.  She saw that Maria, in spite of her hard life, was bright and idealistic and full of possibilities.
The first day Maria began working in our house, I thought I might be able to bribe her to make my bed for me every day. Before leaving for school, I offered her 20 centavos – at the time probably not worth even two cents – to make my bed. When I think about this now, I realize how insulting it must have been, even coming from a 10-year-old child.  But Maria was nonplussed.  She patted me on the head and said my mother had not hired her to do our work for us, no matter how much we offered her. Pointing to my bed, she waited, arms crossed, as I made it sheepishly under her watchful supervision.  As far as I know, she did not tell my mother about this.  I was grateful to her and followed her around the house like a puppy dog when I got home after school.

Maria was a hard worker. My mother liked that she was thorough with her chores, and my father liked that she never had to be told anything twice. Aside from that, she was rapidly becoming like one of the family. She was kind to my sisters and me and would do anything my mother asked her without a moment’s hesitation. She picked up English vocabulary quickly, to everyone’s delight and asked a lot of questions about life in the United States.

One day my mother discovered that Maria was illiterate. Her mother had pulled her out of school at an early age so she could help at home. My mother, who valued education highly, still struggled with Spanish, but she managed to teach Maria how to read and write. My father often came home to find all of us at the kitchen table, my sisters and I doing homework and my mother and Maria copying words from one of our school workbooks.

Before long, she began talking about going to high school. My mother promised Maria that if she could get her mother to agree to this, she could have the afternoons off to go to classes.

It seemed to be a good partnership, each helping the other in her own way, until Maria stopped coming to work abruptly. It may have been due to circumstances beyond her control; her mother, it seems, did not like the idea that her daughter was learning English, or anything for that matter, much less from a gringa.

I remember hearing my parents discuss this. They thought Maria’s mother, an indigenous woman, was afraid that her beautiful daughter would leave home, maybe even go to the United States and leave her to fend for herself. She probably felt she had no other choice but to keep her daughter away from us.
There was nothing my parents could do.  They were clearly frustrated by this turn of events, more for Maria than for themselves.  I do not think my mother missed having a maid as much as she wished she could have helped Maria achieve a better life.
My parents reluctantly hired another maid named Rosa a couple of months later.  I say “reluctantly” because my mother was convinced that she would never find another maid of Maria’s caliber.  She was right.  Rosa lasted a week, until my mother found her sneaking out of the house with a pocketful of silverware.  After that, she went back to doing her own housework, training us, her daughters, to be her able assistants.
We never saw Maria again.  I wish I knew what happened to her. Assuming she is still alive, she would be in her 60s and is probably a grandmother.  I would like to think that her dreams came true and that she was able to rise up from her poverty.  If nothing else, I hope she found the happiness and fulfillment she deserved.
*  Gene Vallee was a lifelong friend of my grandfather’s.
** Joe Hanlon was our (and my grandfather’s) next door neighbor on South Luella Avenue in Chicago.