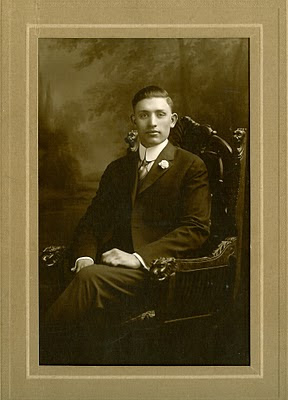 
The following is Part One of a four part series on the life of my wonderful Italian grandfather.


My maternal grandfather, Ralph Schiavon, was one of those rare children born with a veil over his head.

Not long after arriving in America, Ralph began selling newspapers after school. He also worked for a time helping load pianos on freight cars.  Though his jobs left him little time for homework, he was a natural student and a quick study.  His principal at the Shurtleff School, Miss Adams, called him “brilliant” and “very businesslike.”  Perhaps the latter descriptionwas more revealing than at first glance, as it is clear that Ralph had to grow up quickly.  Unfortunately, Vito, who like many of his fellow immigrants had never learned to read or write in the old country, decided at some point during 1908 that Ralph had spent enough time at school and he should be working full time to help support the family.  Over Miss Adams’ loud protests, he pulled his young son out of the third grade and sent him to work in Roxbury at the same leather shoe factory as his brother Pat.  Ralph, who loved school, was devastated, but he had no other choice but to obey his father.  He was barely 10 years old, but the greatness for which he had seemed destined at birth was waning in his eyes.

Next:  Part Two – Young Immigrant in a New World