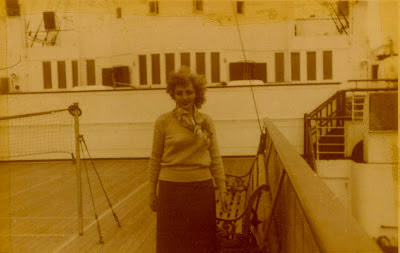 Though my mother initially had not wanted to go to Europe, she was soon mesmerized by the fascinating people and whirlwind activities on board the luxury oceanliner H.M.S. Queen Mary as it sailed across the Atlantic Ocean from New York to Europe.

While my grandmother, Alice (McGinnis) Schiavon quickly made friends with a number of couples, my mother soon found she had no shortage of dinner and movie escorts.

Among these was Abraham Aronoff.  From what I recall my mother telling me, they met on board the Queen Mary, but he appears in several pictures with her, not just on the ship but in Switzerland and Italy, too.  It is not clear whether he just happened to be on the same tour as the Schiavon women or if he rearranged his itinerary to be with them.  In any case, while my grandmother enjoyed having him around, my mother was not interested in anything beyond a friendship.

From what I have been able to find out about Mr. Aronoff, he was from New York.  The passenger manifest on the return Cunard ship R.M.S. Queen Elizabeth notes that he was 40 years old and resided at 1664 Davidson Avenue in the Bronx. I was able to find him in the 1940 U.S. Census, where he lived with his Russian-born parents and a brother.  His occupation was listed as a post office clerk.

(Coincidentally, shortly after my mother and grandmother returned to Chicago, they opened an antiques gallery on Chatham Avenue in the “Aranoff Building.”)
After the Queen Mary docked in Southampton, England, Joan and Alice took the train to London, where they stayed for about a week, going to the theater, haggling over silver on Portobello Road, and visiting Buckingham Palace (where my mother did her best to make the Queen’s Guard crack a grin).
They continued on to Ireland, stopping to kiss the Blarney Stone, and to Dresden, Germany via Belgium and the Netherlands.  After witnessing the rebuilding that was going on in postwar London, my mother was shocked at the tragic destruction she saw in Dresden, which was bombed heavily during World War II.  They did not stay there long but left after about a day for Switzerland, visiting Geneva, Lucerne, Berne, and Interlaken.  As you can see from the photos, Abraham Aronoff was there, too.
Mother and daughter were highly impressed by the cleanliness of the Swiss.  It was their honesty, however, that left the greatest impression on my mother, who forgot her purse on a park bench in Lucerne and returned some time later to find it, still on the bench, untouched.
I love these photos of them.  Note the formality of their dress, even on the Rhone Glacier at 8,000 feet high!  In today’s world, most people would never dream of dressing in skirts and heels but would have bundled up in down jackets, jeans, and sturdy hiking shoes.  The board underneath their feet does not look all that secure, either, does it?
From Interlaken, the intrepid trio traveled by train to Italy. They rode on a gondola under the Via degli Schiavone, laughed at the surprisingly small Leaning Tower of Pisa, and marveled at the ceiling of the Sistine Chapel.  They rubbed their hands for good luck across the now well-worn bronze foot of Jesus in the Pieta (today sheltered behind glass) in Saint Peter’s Basilica in Vatican City, prayed in the Catacombs, and marveled at the beauty of the Appian Way on their way down south to Naples.
During their numerous stops throughout the Continent, my grandmother searched out the best places to buy exquisite antiques, porcelain, and silver, eager to bring them back to Chicago, where she planned to open an art and antiques gallery.  She had excellent taste and seemed to have an innate sense of knowing what to buy. She made sure my mother paid attention so she, too, would learn to appreciate their history and beauty.
Of all the places they visited, I think my mother loved Italy the most.  It meant a lot to her to be in the land of her father’s birth, and though she could not speak Italian, she appreciated the grand history and culture and religious influence there.  Her only disappointment was that while they visited Naples, near my grandfather’s birthplace of San Sossio, they never actually made it to that small mountain village, most likely because it was not an easy place to reach.
Toward the end of September, my mother and grandmother spent a few days the south coast of France, visiting Nice and Monte Carlo, Monaco, before heading to Paris.  Their last stop was at Cherbourg, France, where they boarded the R.M.S. Queen Elizabeth for the trip home the United States.
With their trunks brimming with carefully packed antiques, Irish Belleek tableware, German Dresden figurines, and French Meissen and Limoges dishes, tour books, and souvenir postcards, it was a surprise that there was anything left in Europe after they returned to America.
My mother left her heart there, though.  After all her youthful protests against going across the pond to Europe, she was not ashamed to admit that she hated to leave, and she vowed to return one day.
It would be her only trip there. Many years later, her daughters – my sisters and I – would travel to Europe at various times, retracing her footsteps in some of the old places and exploring new ones she had long dreamed of visiting.  She may not have made it back in her lifetime, but she was definitely there with us in spirit.
Copyright ©  2012  Linda Huesca Tully

2 Thoughts to “Matrilineal Monday: Falling in Love with Europe”