Who are these men?

These two cabinet card photographs are part of a larger collection of “mystery pictures” that belonged to my great-great grandmother, Catherine (O’Grady) Perrotin.

From the dates on the back, it appears she received the photographs while living in Orizaba, Veracruz, Mexico, perhaps as she was preparing to move to England in 1895 to join her daughter, and son-in-law, Maria Dolores and Timothy Bennett.  At that time, she would have been about 53 years old.  Of course, it is also possible that the pictures were sent to her after she arrived in England.   Both pictures were taken in Orizaba, at the Lucio Díaz studio. 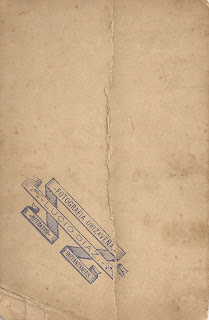 The men appear to have been friends or co-workers of my great-great grandfather, Charles Jacques François (“François”) Perrotin, who was a mechanic for Ferrocarriles Mexicanos, the Mexican Railway System, at Orizaba Station. (François died in Orizaba on May 25, 1891, of meningitis.) Timothy Bennett, Maria Dolores’s husband, also worked for Ferrocarriles Mexicanos as a train engineer.  All appear to be either American or European, perhaps British, French or Irish.  This is especially plausible, given that these groups engineered and built the Mexican Railway line from Veracruz to Mexico City.

In the first picture, the two gentlemen appear to be dressed in conductors’ uniforms, wearing ties, pocket watches, and pinstripe suits.   The bowler hats they are wearing would suggest that these are not their official portraits, as they would be wearing conductor’s caps instead.  There is no identification or dedication on the back of the card, except for the name of the photography studio.

The second picture, below, is dedicated to Catherine: 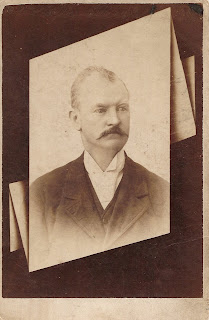 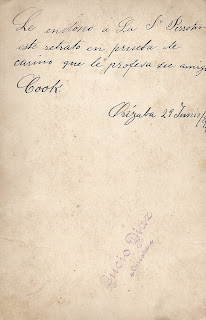 “I dedicate this portrait to Mrs. Perrotin as proof of the affection of her friend, Cook.”

The dedication is dated June 29, but the year is illegible.  Cook appears to be wearing the uniform of a railway worker, perhaps a conductor, but we cannot be sure.  I am not good at guessing ages but would estimate that he was somewhere between his late thirties to early fifties – a wide range, to be sure.

In an intriguing coincidence, a father and son with the last name of Cook appear  in the 1860 United States Federal Census, as neighbors of the then-newly married Perrotins in Shreveport, Louisiana.  Thomas Cook, age 74, appears to have been a gardener (though the writing on the census form is unclear) who came to America from his native England in 1808.  His son, Robert Cook, was 18 years old and a native of Indiana.  Interestingly, he is listed as a “Gin Maker.”

Perhaps the Cooks and Perrotins were good friends.  Could the son (and possibly the father) have gone to Orizaba with the Perrotins?  If Thomas Cook did go to Mexico, even at his advanced age, it is unlikely that he worked there.  But Robert, who was about a year older than Catherine, would have been young enough to embark on such an adventure, either working on the Mexican railway with the others, or in another profession…

If anyone reading this has any thoughts on the identity of these men or suggestions for where to look next, I’d love to hear them.

Next:  The Railway Men of Orizaba – Part Two