This week marks the 152nd anniversary of the marriage between Charles Jacques François Perrotin and Catherine O’Grady (also known as Catherine Grady), on January 26, 1860, in Shreveport, Louisiana.

Here is a copy of their Certificate of Marriage.  A transcription follows, along with a short background of a legendary Catholic priest who united the couple in Holy Matrimony. 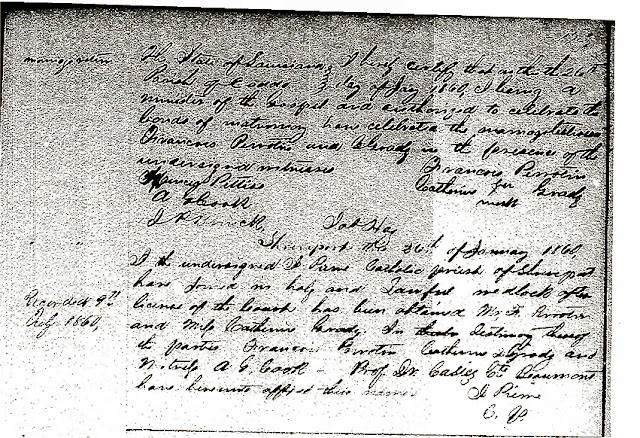 Transcription
State of Louisiana   }
Parish of Caddo      }
I hereby certify that on the 26th day of Jany 1860, I being a minister of the Gospel and authorized to celebrate the bonds of matrimony have celebrated the marriage between François Perrotin and C. Grady in the presence of the undersigned witnesses.
François Perrotin
Catherine Grady       X her Mark
Nancy Petters
A Cook
J P. Brinck
Recorded 9th
(illegible) 1860
Shreveport the 26th of January 1860, I the undersigned J. Pierre, Catholic parish of Shreveport have joined in holy and lawful wedlock after license of the Court has been obtained Mr. F. Perrotin and Wife Catherine Grady.  In testimony thereof its parties François Perrotin, Catherine O’Grady, N. (illegible)     A. G. Cook, Prof. Dr. Casiez Cte, Beaumont have hereunto affixed their names.
J. Pierre
C. V.

What the Record tells Us

According to this record, François and Catherine were no youngsters when they were married.  He was 42; she was 25 – a bit older than the typical brides of the time.  The priest’s  notation that Catherine signed her name with an X, “her mark”  suggests she could not read and write.  That would not be unusual for a young girl who fled dire poverty during the Great Irish Potato Famine.

There were three witnesses to the marriage: Nancy Petters, A. Cook, and J.P. Brinck.

I could not find Nancy Petters in any of my research, but I did find J.P. Brinck in the United States 1860 Census.  He was a 34-year-old boot and shoe manufacturer from Norway, married and the father of five young children who ranged in age from six months to eight years old.  Another record lists him as Johannes Petter Brinck.  Was Nancy Petters his wife? The census shows his wife’s initials were C.E.  She was a milliner, so she might have known or even worked with Catherine, a seamstress.

Two people by the last name of Cook appear in the Perrotin’s lives over a span of years.  This record is the first instance.  “A. Cook” could have been either Thomas or Robert Cook, father and son, shown in the 1860 census as neighbors of the Perrotins.  Thomas, age 78, was a gardener at the time; Robert was an 18-year-old a gin maker.  As Robert would have not been considered of legal age, it seems plausible that his father was the marriage witness and possibly used the initial of his middle name.  The second time the name Cook emerges in the Perrotin’s lives is in Orizaba, Mexico, where they moved in the late 1860s.  Like them, he might have been part of the sizable expat colony that migrated to Orizaba to work on the fledgling Mexican Railroad in the mid-nineteenth century. “Your friend, Cook,” as he signed himself, either gave his photograph to Catherine before she moved from Mexico to England in 1895, or maybe he mailed it to her from Orizaba. In the photo, he looks to be about 50 or so, which would line up with the age Robert Cook would have been by then.

“J. Pierre” was Father John Pierre, the founding pastor of Holy Family Church, the first Catholic church in Shreveport.  As a seminarian in France, Pierre had been recruited by Bishop Augustus Martin of the then-new Diocese of Natchitoches, to do missionary work.  He arrived there in 1854.  On his ordination date one year later, Bishop Martin appointed Father Pierre as pastor of the first parish of the diocese, Holy Apostles.  When he became aware that the Catholic families in the nearby city of Shreveport had no priests or places to worship,  Father Pierre persuaded the bishop to let him expand his missionary work. He bought land on the corner of Fannin and Marshall Streets in Shreveport, where he built a small wood frame church (the first in Shreveport) in 1856.  He replaced it with a larger brick church three years later.  This was Holy Family Church and most likely is where he married François and Catherine.

Thirteen years later (and long after  François and Catherine had departed Shreveport), the beloved Father Pierre died of yellow fever, one of five Catholic priests to be stricken during a tragic epidemic.  It was a sad day for the people of Shreveport, who had known Father Pierre as a tireless evangelizer for the Church and a devoted minister to the sick.  Another priest of the time, Father Joseph Gentille, wrote of Father Pierre, “His death was a public calamity.  He was loved and esteemed by all.”

In a fateful coincidence, yellow fever would go on to claim the life of the Perrotin’s only son, Francisco, some 26 years later in Orizaba, Mexico.