Linda Huesca TullyNovember 15, 2013April 9, 2018Leave a comment on Friday’s Faces from the Past: Keeping the Lion Warm on a Winter DayBenita (McGinnis) McCormick

My grand aunt Benita — Aunt Detty as our family knew her —  kept a large scrapbook with fascinating photographs of her life and the people she knew.  Among the photos was the one below of her classmates from the School of the Art Institute of Chicago, shown in front of one of the iconic lions at the entrance to the Art Institute. 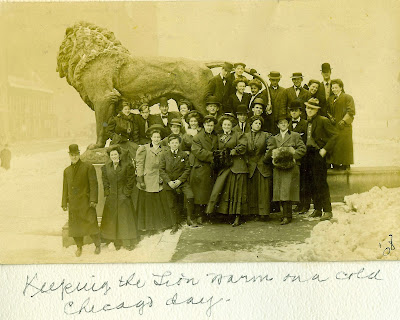 Though she did not name any of the young people in the photo, she did caption it, “Keeping the Lion Warm on a Winter Day.”  No doubt they were trying to keep themselves warm, too, with all that snow on the ground.

Interestingly enough, Aunt Detty does not appear in this picture.  I wonder if she was standing next to the photographer?
It would be wonderful to know who the people were, which were her close friends, and what became of them all.  If you spot someone you recognize, let us know.
They sure do look like a fun bunch, don’t they?
**********
Copyright ©  2013  Linda Huesca Tully