The three years my family spent in Mexico City before moving to California in the mid-1960s gave my sisters and me the opportunity to get to know our paternal relatives and learn my father’s native language and culture.   I have often thought that if every young person had the chance to live in another country, our world would be a better place for it.

Being children, we adapted easily to our new life down there as it came.  We probably did not even notice there was much difference between the Mexican and American way of life.  For me, it was when we moved to California, that I noticed the differences more.  By then I was nearly twelve, a pre-adolescent and more sensitive to differences.
From the fourth through the sixth grade, I learned so much about the conquistadores, the Aztecs and other natives, and the trials and victories of Mexico that I treasured its heritage as much as my American heritage.  Even knowing that both countries had been at odds with each other over what is now the Southwestern United States, it did not seem unnatural to love both for their pride and richness of culture.  My mother, Joan (Schiavon) Huesca, probably had a lot to do with this, as she had a lifelong fascination with Mexico and the Mayan culture in particular.

The one thing my dear mother could not master was how to cook a proper Mexican meal, though she tried her best to watch and learn from my grandmother and my aunts.  She seemed meant to excel at her American and her father’s Italian specialties, illustrated one day when she invited one of my aunts to see her “cochina,” as she called it.  She had been trying to translate the Italian word for kitchen, cucina, into Spanish.  My aunt figured it out and was relieved there was not a live pig in the house.

Instead of “depriving” us of Mexican dishes, we got to enjoy the best of all worlds:  my mother’s specialties and my aunts’ Mexican cooking.  What wonderful cooks my aunts were!  They made the best mole poblano, enchiladas suizas, tortas, and other specialties too numerous to mention, always using fresh ingredients from their daily trips to the neighborhood market stands and shops.
Those markets were a feast for the senses.  American-style supermarkets were just getting started in Mexico, but the way people shopped then and still do today, was by going daily to market to pick out fresh produce, meats, chiles, spices, and other tempting items from local farmers and vendors. There was no such thing as choosing between paper or plastic bags at the store, either.  Shoppers brought one or two of their colorful plastic woven tote bags, just enough to fit what was needed for the day’s meals.
There was a tortilleria, or tortilla shop, just down the street from our home on Altamirano Street in the Colonia of San Rafael.  On our way home from school, we often stopped to watch two Indian women make  towers of warm, fresh tortillas.  They had broad faces and thick black hair tied into long braids going down their backs.  The dull color of the maize they worked seemed to come to life against their bright aprons over their peasant blouses and long, full dark tiered skirts.  All day long they would sit cross-legged on angled stools, rolling masa, or dough into small balls and patting them back and forth quickly between their hands.
Once the dough was flat and thin, they placed it onto a conveyor belt which flatted it even more between rollers.  They would take turns, one shaping the tortillas, and the other placing them over a fire, turning them over constantly by hand while they cooked.  We could see the burn marks on their reddened hands from the hours and days of work over that hot stove.  I wonder how many of us thought about that when we bit into these heavenly-tasting staples of Mexican cuisine.
Sometimes, you did not even have to leave home to buy things.   Often, things would come to you.  Street vendors, called pregoneros, were plentiful in most neighborhoods.  The vendors came down the streets in pushcarts or by bicycle, whistling and calling out their wares in a nasally sing-song: “Candyyyyyyy?”  “Ice Creeeeeeeeaaammmm?” “Floweerrrrrrrs?”  “Sugar Caaaannnne?  Sweet Sugar Cane!”  “Loofahsssssss? Spongessssss?”  Chiles?  I have the freshest chiles!”
Even the garbage man got in on the act.  Though we were in the middle of one of the largest cities in the world, there were no garbage trucks but individuals who pushed large metal cans slowly down the street.  “Garbaaaaage?”  Garbage!”  they would chant, loudly enough for Mexican housewives to hear through their open windows.  The women would rush to bring their small plastic bags of trash out to the street, where they would drop it into the large metal can and give the man a 20 centavo coin – the equivalent of about two cents.
The garbagemen tied long primitive looking brooms to the cans.  They probably made the brooms themselves by wrapping long bunches of thick straw around long sticks.  This was the kind of broom most houses had, and you often saw women outside in the mornings after breakfast, sweeping the sidewalk in front of their homes, greeting their neighbors and passersby.
There always seemed to be some kind of wonderful festival.  Three Kings Day – the feast of the Epiphany on January 6, trumped Christmas in Mexico.  Christmas managed to remain a religious holiday, and families everywhere prepared by hosting posadas, or Advent parties, reenacting the trek to Bethlehem by Joseph and Mary as the guests/pilgrims go from house to house, singing for shelter.  Santa Claus was practically non-existent, and children received clothing as Christmas presents.  The real loot came on Three Kings Day, when the Magi brought all the toys and candy to good little children.
There was no question, though, as to who had the best holiday lighting.  While Mexican homes restricted their outdoor decorations to images of snowmen, Santa Claus faces, and the three kings, businesses big and small created fantastical scenes with bright colored Christmas lights.  The skyscrapers were the best, as the lights often covered most of their façades in moving scenes, each trying to outdo the other.
They did this on Independence Day, too.  September 16 – the day that Mexico declared its independence from Spain in 1810, is the day Mexicans revere, not May 5 as is mistakenly feted here in the United States.  On September 16, the president of Mexico appears on the balcony at the Presidential Palace in the downtown Zócalo, to proclaim the Grito de Dolores – the Cry of Independence and to ring the Bell of Independence against a background of colorful fireworks.
Not only did Mexicans honor their mothers and fathers with special days, but they also had special days to honor teachers, children, policemen, mailmen, and even garbagemen.  But none of these could hold a candle to the most sacred day of all for every Mexican:  the Feast of Our Lady of Guadalupe. 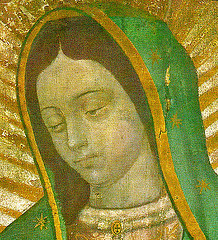 Every December 12, Mexicans celebrate the anniversary of the apparition of the Blessed Virgin Mary to the Indian Juan Diego in 1531 on the hill of Tepeyac, which at the time was on the outskirts of the city.  Dressed in the clothing of a native Indian woman, she gave him a sign to bring to the bishop, along with instructions that he should build a church on Tepeyac.  The church would aid in the conversion of and offer consolation to the people of Mexico.  The sign, which Juan Diego thought was an unlikely bunch of roses wrapped in his cloak, turned out to be a miraculous image of the Virgin on the cloak, or tilma, instead.  The bishop built the church, and since then, Juan Diego was declared a saint and Our Lady of Guadalupe was declared patron saint of Mexico and of all the Americas.
Her image is everywhere in Mexico:  in homes, on windshields, on clothing, and in stores.  On December 12, people flock to what is now the Basilica of Our Lady of Guadalupe to pray and hear the story again.  Many make pilgrimages from afar, sometimes coming the final miles on their knees in penance for their sins.  But the message is clear that it is a day of prayer, reflection, and immense love for Our Lady, who Mexicans consider their spiritual Mother.
The time we lived in Mexico taught me so much more than any class on culture could have done.  We may have left the country when we moved to California, but we carried with us these customs and so many others that always will live deep in my heart and form much of who I am today.   I will be ever grateful to my parents and to the wonderful people of Mexico for this priceless gift and the many lessons it has taught me.