Once my parents were declared husband and wife by Justice of the Peace Miles E. Cunat on August 19, 1954, they went home to pack their clothes for the next few nights.
They first stopped at the Schiavon home on Saint Lawrence Avenue, then to the apartment my father had rented just a month earlier. Calling his print shop, Lakeshore Printing, he told the  employee who answered the phone that he would not be in until the following Monday.  Then he called his mother, Catalina (Perrotin) Huesca, in Mexico City, his brother Carlos, who was living in Chicago by then, and last but not least, his close friends Luis and Theresa Algarin and Frank and Fern Waples, with the good news.
My parents most likely headed down to the Loop after that, where they checked into the Hotel Sherman, located at the time on Randolph at Clark and LaSalle Streets. The receipt below shows that they checked in at 8:44 on that evening and stayed for two nights, paying $11.45 per night for their room.  Shortly after arriving in the room, a bellman brought the newlyweds a basket of fruit from the management.
My mother sat down at the desk and penned a telegram to send her parents, Ralph and Alice (McGinnis) Schiavon, who were vacationing in Miami, Florida.  The draft, which she composed on a piece of hotel stationery, shows her pride in becoming Mrs. Gilbert Huesca: 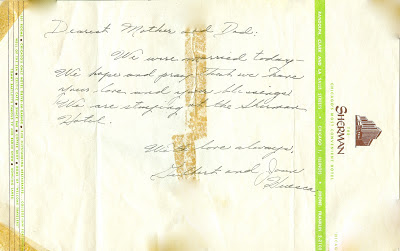 Dearest Mother and Dad:
We were married today-
We hope and pray that we have
your love and your blessings.
We are staying at the Sherman
Hotel.
With love always,
Gilbert and Joan
Huesca
Some time after midnight, the phone rang.
My father answered it.  Fern Waples was calling.  In a cheery voice, she asked, “Hi, Gil!  What are you two doing right now?’
My father shook his head, slightly taken aback.  He grinned at my mother.  “We’re playing chess, Fern,” he answered.
“Oh.  Great.  Well, have a good time, Gil.”  Mrs. Waples said, satisfied, and hung up.