Linda Huesca TullyOctober 27, 2012August 2, 20182 Comments on Once More Around the BlockHuesca Schiavon 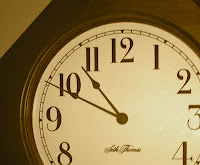 When we kids wanted to hear a story, our parents, Gilbert and Joan (Schiavon) Huesca, often reminisced about their first date.  It was one of our favorite stories.  I heard it again one last time in 2009, months before my father died, as he shared his still vivid memories of that time.

It was early May, 1954, and they went to see Otto Preminger’s River of No Return, starring Robert Mitchum and Marilyn Monroe.  When my father picked my mother up at her family’s antiques store, Chatham Galleries, she said her father, Ralph Schiavon, had told her in no uncertain terms that she was to be home by 9:30 p.m.
“He was a big man with a big voice,” my father told me.  “And your mother said, if he said 9:30, it had to be 9:30.  Not a fraction of a second later.”
They took the Illinois Central (known locally as the I.C.)  “L train,” short for Elevated train, downtown. “We never saw the movie, of course,”  my father confessed.  “I sat there looking at her, and she was looking at me.  And we left there and got to the station and found that the train had already left.
“She said, ‘Oh my God, we missed the train!  What can we do?’
“I said, well you better call your father.  So she did, and he asked where we were.  She told him we were right in the Loop, and he said, well you must return on the next train.  I could hear his voice, even from the phone booth.  It was very stern.
“When we arrived at the station, he was there to meet us.  I thought, oh my God.  I was already afraid of meeting him, and this was the first time I met him.
“And he was very kind.  What a relief.  I was very thankful for that.”
Did they kiss goodnight?
“Not that night.  Not with her father standing right there,” my father grinned.  “I knew I couldn’t if I wanted to see her again.”
My mother loved talking about that first date.  She removed one of her earrings and gave it to my father to hold for her during the movie.  She conveniently “forgot” to ask for it later, so my father would have an excuse to bring it back to her and they could see each other again.  (My mother told this story so many times that when I began dating, I always planned ahead what small item I could “forget” in case I wanted to see my date again.)
She didn’t remember seeing much of the movie, either.  While they sat in the theater, she spent most of the time moving my father’s arm off her shoulder, only to have him put his arm around her again.
Whenever she recalled this part, her face would light up.
My father’s friends, Frank and Fern Waples, waited up for him that night as if he were their own son.  Fern asked how he liked the movie.  “Beautiful movie,” my father replied.  “I don’t know what happened, but it was a beautiful movie!”
“Gilbert!” she exclaimed.
When he told her about the missed train episode, she frowned.  “This isn’t just any girl, Gil.  If you really want to see her, you’ll have to get her home on time and do exactly what her father says.”
From then on, my father walked over to the Schiavon home most evenings to visit my mother.  He did not own a car or have much money, so their dates typically consisted of coffee and dessert at the Waples home, strolls in the park, or simple walks around the block, holding hands and talking.  As far as they were concerned, they could not have enjoyed each other more if they had been on the Champs-Elysées or dining at a five star restaurant.  Being together was all that mattered. Though my mother was nearly 26 and a responsible adult, she still lived at home with her parents, as most young single women did in the 1950s.  Moreover, as the daughter of a strict Italian father who loved her fiercely and protectively, she accepted that he was the head of the household and respected his stringent rules. This, however, is not always easy to do, especially when the days have grown long and you are very much in love.
“Oh, please, Gil,” she would say most evenings.  “Let’s just go once more around the block.”

How could he say no to her? Off they would go, again and again, oblivious to the neighbors watching amusedly from their porches in the sticky Chicago heat, until the street lights on Saint Lawrence Avenue came on and my grandfather would look out the front window.

2 Thoughts to “Once More Around the Block”