Origin of the Name

It is believed that the Huesca family originated in Spain, in the province of the same name. Huesca lies in the northern Spanish region of Aragon. The city of Huesca is the provincial capital. The city goes back to pre-Roman times, when it was known as Bolskan, but the name was changed to “Osca” by a Roman general to honor its victorious efforts in battle.

The city became known as “Urbs Victrix Osca,” or Victorious City of Osca. The name took on the form “Wasqah” or “Waska” during the Arab domination of the region, and the city was fortified against the Christian counts and the kings in the Pyrennees. Peter I of Aragon conquered the city in 1096, after which the name took on its now Spanish version.

Although the earliest members I have found of the Huesca family have been in Mexico, I surmise that someone, perhaps of that Spanish city, must have come over with one of the early expeditions to New Spain, or Mexico, sometime between 1500 and 1700. There were quite a few persons with the Huesca surname during that time. I am, however, able to trace our Huesca family back to Mariano Pantaleón HUESCA of the city of Puebla, Mexico.

From what I can tell, our Huescas came from the state of Puebla in Mexico. 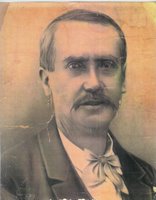 Mariano Pantaleón HUESCA was probably born somewhere between 1765 and 1780, perhaps somewhere in Puebla? He married Ana Antonia Gertrudis CARPINTERO on November 18, 1801, at the Sagrario Metropolitano, in Puebla de Zaragoza, Puebla (State), Mexico. They had at least one child, a son, Jose Calletano de la Trinidad HUESCA, who married Josefa Rodríguez, daughter of Felipe RODRIGUES (note the different spellings between father and daughter). I do not know who her mother was.

1. José Agustín de Jesús HUESCA, who was christened on January 30, 1840, in the Sagrario Metropolitano, in Puebla de Zaragoza, Puebla, Mexico. 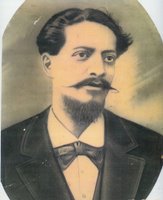 osé Enrique Florentino HUESCA (shown here at left), was  christened on May 5, 1847, in the Sagrario Metropolitano, Puebla de Zaragoza, Puebla, Mexico. Other accounts say he was born in 1850 in the state of Puebla, Mexico. He married María de la Luz “Lucecita” MERLO, who was born ca. 1865 and was the daughter of Juan MERLO and Teodora “Teodorita” Figueroa. The name “Luz” in Spanish means “Light.”

My father remembers that his grandfather used to say, “me levanto con Luz y me acuesto con Luz,” or “I get up with Light and I go to bed with Light.” I am told by my father that José Enrique was a craftsman who made beautiful cabinets and furnishings for many of the churches in the city of Puebla, as did his father before him. He died August 20, 1920, in Cañada Morelos, Puebla (state), Mexico.

a. J. Gil Alberto Cayetano HUESCA , born September 1, 1888, in Cañada Morelos, Puebla (State)., Mexico, and died September 11, 1938, in Mexico City, D.F. Married María Angela Catalina PERROTIN on February 21, 1912, in Tierra Blanca, Veracruz, Mexico. He was my grandfather and a very special person. More to come about him in my next post.

b. Enrique HUESCA – also a craftsman — made my grandmother’s wardrobe.

c. Jesús HUESCA – His wife’s first name was María. They lived in Jalapa, Veracruz. They had a son, Cayetano, who died in the mid-1920s. Maria died in about 1936. Jesús lived into about his 80s. In his later years, he lived with his nephew (my uncle), Enrique HUESCA and helped him in his linen embroidery business, Sábanas y Manteles Huesca, in downtown Mexico City. Uncle Jesús lived on the same floor as the business, which was on the fifth floor of 93 Venustiano Carranza Avenue in Mexico City. He dressed in khaki shirts and matching pants and sometimes wore a light beige cowboy hat. He was loving, quiet, humble and gentle. I remember always wanting to be around him when I was a young child.

d. Domitila HUESCA – She married Vicente CAMPOS and and lived in Jalapa, Veracruz, Mexico. They had a son, Willivaldo, who committed suicide in the 1970s. Willivaldo had a daughter, Yolanda CAMPOS, who was very good to her grandmother and cared for her when Aunt Domitila grew too old to care for herself. Aunt Domitila was one of the family historians and wrote fascinating letters, many of which I still have. Her penmanship was of the old Spanish style, elegant and meticulous. She died in the late 1970s, possibly into her late 80s.

* Elvira HUESCA – married Adolfo CAMPOS, a general during the Mexican Revolution (my father remembers he had a large handlebar moustache). They later moved to the United States and settled in Chicago. They had no children.
* Enrique HUESCA
* Amalia HUESCA

* Delfina HUESCA
* Charles Delfino HUESCA – married MARIE RIZZO in Chicago. They were very close and were excellent dancers. They had a son and later moved to Atlanta, Georgia, where Charles died of a heart attack while working in his back yard,  there in 1988.  Marie died ten years later, in 1998, also in Atlanta.

* Margot HUESCA – married and had a daughter

6. José Antonio de Jesus HUESCA – christened on June 14, 1849, in Santo Angel Analco Church, Puebla de Zaragoza, Puebla, Mexico. He married Emilia BENITEZ, whom he called “Emilita.” Antonio, as he was called, and Emilia had two sons and a daughter, Gonzalo, Agustín, and Delfina.

b. Agustín HUESCA – was born in about 1881, in the town of Jalapa Enriquez, Veracruz (state), Mexico. He was an architect who married Dolores CORTES (daughter of Antonio ROCHA and Francisca CORTES BAZURTO, born September 30, 1885) in 1913, in Jalapa Enriquez, Veracruz, Mexico. They had two sons, Agustín and Enrique. Agustín Huesca died on February 11, 1964, at age 83.

c. Delfina HUESCA – was born Mach 4, 1888, in Jalapa, Veracruz; married an engineer, Lorenzo YANEZ.  Lorenzo’s great-great grand-daughter, Luciana Toledo, recalls that he was “an engineer of the road constructions in the state of Veracruz.  In the small town of Cardel, Veracruz, one of the main streets is named after him.”

Lorenzo and Delfina had four children, a son, Lorenzo Alfonso, nicknamed “Pocho,”  born August 26, 1917; and three daughters, Clara Elena, born in about 1920; Delfina; Ana María.   My father, who was two years older than Alfonso, told me he was burned badly in the kitchen while he was very young.  A 1948 United States Border Crossing card, issued in Nogales, Arizona, notes that Alfonso was born in Hermosillo, Sonora. It identifies him as being 30 years old and married, with burn scars on his face and hands.  Employed as a federal employee for what may have been the national highway agency, he was traveling on business and pleasure.

Postscript:  On April 15, 2015, I received an e-mail from “one more member of the Huesca tree,” Luciana Toledo. In her her e-mail, Luciana observes that I originally mis-identified her great-grandmother as María Elena and left out her father’s first name, and she graciously provided the correct information.  Luciana also proudly writes that her great-grandmother, the last surviving of the Yañez-Huesca siblings, is about to turn 95 years old and lives in Mexico City.  Felicidades, prima María Elena!  How I wish my father were alive to see this!  It is a thrill to hear from my “new” cousin, and I am grateful to Luciana for reaching out to share more about our beloved Huesca family.  Connecting to each other and sharing our heritage: this is what Many Branches, One Tree is all about!  L.H.T.

2 Thoughts to “Huesca: Origin of the Name”